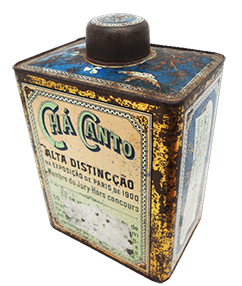 Chá Canto (Canto's Tea) was produced in the factory of Mr. José do Canto. This unit initiated its activity in 1883 and was located in the secondary road that connects the city of Ribeira Grande to Lagoa do Fogo on the island of São Miguel in the Azores.

Of all the tea factories, Canto's was the most emblematic of all, not only in the Azores but also in main land Portugal.

José do Canto was one of the main promoters of the introduction of tea in the Azores, having also owned a tea plantation on another Azorean island, Faial.

His entrepreneurial spirit drove him to hire two Chinese technicians to come to the Azores to improve tea production techniques.

For many different reasons, José do Canto's heirs were led to quit producing tea in the early seventies of the twentieth century.

In 2011, Maria Jardim Hintze, heiress of José do Canto, offered the “Canto” brand to Hermano Mota, of Gorreana tea factory, under the condition that the “Canto” brand would be re-launched and maintained in the market as a tribute to its founder.